Female fighters are extremely underrated and almost only included in lists and rankings specifically for females. Instead of separating females (“Top 5 Female Muay Thai Fighters”), why not include some of them in “Top 5 Muay Thai Fighters”?

It’s time to put females on the map!

Disappointed that many of the popular Muay Thai outlets either lacked information on female fights or had sparse/not regularly updated news, Muay Ying มวยหญิง (Thai for “female fighter”) was created out of a vision to bring Muay Thai news straight out of Thailand, with an attempt to bring female fighters to the spotlight along with their male counterparts. Muay Ying will be a source that all can depend on for fights, news, and results for BOTH males and females, not just one or the other.

Muay Thai is incredible in that it unites all different kinds of people in a world of chaos and prejudicism. It is the ultimate goal of Muay Ying to create awareness in this “male-dominated” sport and show that Muay Thai is for everyone and has been/is currently/will be practiced by people of different genders, nationalities, and religions.

Along with the other informational and wonderful bloggers currently out in the Muay Thai community, Muay Ying hopes to educate those willing to learn about Muay Thai and those who also share a passion for it. 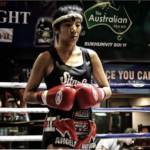 Ever since Angela started training Muay Thai in October 2011, it’s been a passion that burns brighter every day. During her first trip to Thailand in Dec 2015 – Jan 2016, she fell in love with the country. To her, it wasn’t just about the Muay Thai, but also the people, the friendliness, the “sabai sabai” attitude, the food, and even the hustle and bustle that was a bit different than her hometown of New York City.  She returned to Thailand at the end of February 2016 to train and fight full time, and to see just how far her love of Muay Thai can take her.

Since then, she’s been training alongside Thais and fighting whenever the opportunity arises, which isn’t a rare occasion in Thailand!

A long-time Tumblr (miscellaneous categories) blogger, she started writing for Muay Thai Guy around April 2016, an opportunity she is grateful for in that it gave her a voice and confidence to put her thoughts out into the Muay Thai community.

In August 2016, her trainer from Sitan Gym NY, Aziz Nabih, pitched an idea to her. “Why not start your own thing? You can bring attention to female fighters, no matter how big or small.” And that was all it took to get the gears going. With some support and help from her friends, Muay Ying is now a reality.

She currently resides in Bangkok and will be there for the foreseeable future. She welcomes all questions, comments, and encourages you to tell her what kind of content you want to see and what topics you’d like her to write about. You can message her through any of the social media outlets, as well as shoot her an email at MuayYingAC@gmail.com.

If you’d like to collaborate on anything at all, don’t hesitate to reach out!